By Don Strait/Photos by Chris Lane 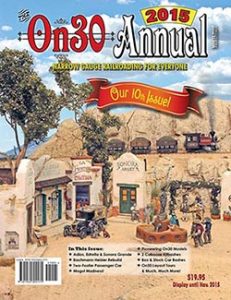 *The occasional use of questionable grammar aside, what a pleasure it has been to be part of the founding and producing of the On30 Annual. My railroad, the Cheyenne Mountain Southern has appeared in many issues in some way, but now I would like to share with you my experiences in actually building an On30 model railroad.

In the 2007 issue I wrote an article about the conversion of HO to On30 by adjusting my existing layout to the new scale. This was just in the infant stages when I had a chance to purchase the house next door to my daughter and her family. Using some inherited funds, I had a contractor come in to remodel the house; living area upstairs and railroad downstairs. The basement re-modeling included a 12′ x 32′ room for the layout, the utility room that hosts the south staging yard, a bathroom and a bedroom that was converted into the workbench area with the north staging yard. The contractor even built-in holes so the railroad could pass into the main room. I moved in shortly after New Years of 2007 and by February was ready to attack the railroad! The daunting task of benchwork was accomplished with what I feel was a brilliant idea; hire the contractor’s assistant to do the actual carpentry work. It took us eight hours in two evenings to build the foot-print that is still the basis of the layout.

The town of Wetmore is a few years removed from the 1946 State Basketball championship. The Goose looks loaded with tourists as it waddles away for the Wetmore depot. This station was featured in the 2008 On30 Annual.

The first two years was spent in the typical roadbed, track-laying, wiring and land form stage that every layout goes through. Most of the work I did myself with help from my friend O. J. Rivas, familiar to many of you as a contributor to many Annual articles and his featured Texas Creek & Southern Railroad. Most of the track is Atlas HO flex-track, a concept I put forth in the 2007 On30 Annual. I did use some Micro Engineering and Peco On30 track on Bennett’s Curve, but have found that ballasting the track compensates for the tie spacing issue of HO track. Manually thrown Peco HO turnouts are used throughout. The only powered turnouts are the inaccessible wyes located at each end of the layout. I installed an NCE DCC system that has worked very well.

The car toads are relieved to find just a Colorado & Midwestern boxcar needing repair. Mountain railroading is tough on the equipment.

I even got so far as to have operating sessions using a car card system with signs propped up to indicate industries. As we finished structures, the signs were replaced by the named industries. My concept of operation is a laid-back narrow gauge system that does not use a dispatcher, phones or fast-time clocks. You work until you are finished and then move on to your next stop. The three passing sidings have to be worked by communication between the engineers as to where meets should be made.

The rolling stock is primarily Bachmann painted but unlettered freight cars that are decaled for the CMS and for friend’s railroads. This is why so many strange railroads show in the layout photos. Five of my seven cabooses were constructed by Jerry Huber and featured in the 2008 On30 Annual. The buildings include plaster cast models, several special buildings using foam board by Keevan Burnside, the Wetmore Station (see 2008 On30 Annual) and J-Bird Furniture Company by O.J. Rivas and the Wet Mountain Tribune building by Ron Renner. Many building flats are included, built using the foam board method by Keevan Burnside and myself to fill in the town areas. The crowning glory of the Cheyenne Mountain Southern is the backdrop painted by Keevan Burnside.

The Trailblazer Coal Mine is an example of the foam board building flats mentioned in the text. The retaining wall is 9″ tall and over 4 feet long and serves to visually separate the upper level mining area from the lower level town. The wall was built of individual 12″ timbers by On30 Annual editor Chris Lane over a several month period. The wall is back filled with individual stones gathered from the mountains and screened to scale size. Lane claims this was done to “achieve a texturally interesting look that holds the eye.” The rest of the Boomers are simply convinced he is just insane.

In the spring of 2009, five retirees who were all members of the Front Range Division, Rocky Mountain Region of NMRA, made a very important decision. We decided to form a group called the “Boomers” (see sidebar) to work on each other’s layouts. The focus of the railroad changed to developing a scenicked layout for the trains to run through.

A Coronado & Southern car is spotted on the team track alongside the Lane & Sons Enterprises building. The products of Lane & Sons remain a mystery to this day.

The design of the layout and track plan is to stretch a small layout into more mainline running. I could have jammed more track into the space but I wanted to maintain the spread out, mountain climbing feeling. The concept is augmented by the rule that a train will have five or fewer cars plus the engine and a caboose as well as one time through a scene. Slow speeds also make the railroad seem bigger and makes a good representation of what might have been in south-central Colorado. This railroad proves the adage: “On30 is funner!”

The term “Boomer” is a traditional name for itinerant railroad workers always moving from one railroad to another looking for work. In our case, the “Boomers” refers to five retired individuals that have created a round-robin group that meets every Thursday afternoon at a member’s layout. The group serves as sounding board for developing concepts from a group of modelers with various and diverse skills and scales.

The current roster of Boomers includes Jon Bennett – 1/32 scale outdoor railroad (not a garden railroad but a scale layout with scenery and structures); Keevan Burnside – HO and HOn3 scales; Ned Habich – N scale; Ron Renner – HO scale; Don Strait – On30. Also a member is On30 Annual editor Chris Lane, definitely not retired, but he joins us when he is available.

The turnaround of the Cheyenne Mountain Southern from a plaster covered “plywood prairie” to an actual depiction of Colorado narrow gauge shows the skill and ingenuity of the group. Not only have the “Boomers” contributed to each others railroads, but has also become a support group for the trials and tribulations that goes with being a senior citizen.

While most retired people meet at “Mickey D’s” for camaraderie and coffee, we achieve the same concept but make good use of our knowledge and skills in something constructive. We have been extremely lucky in that all of us have similar philosophies as to what a Colorado railroad should look like and have various skills and talents that creates an extremely effective working group. The discussion and implementation of various techniques has created many joint projects that would have taken a great deal of time to produce working alone.

These concepts and views have allowed the Cheyenne Mountain Southern progress in the development of the railroad to create the feeling of Colorado narrow gauge. Using a freelance name for the railroad allows us to develop what I wanted to achieve, while staying in the concepts a real railroad would do.

I encourage you to form small working groups to achieve your goals. Choose people that have compatible skills and outlooks. Each person gravitates to things they do best and the joint creation achieves an exciting and satisfying layout. After all, as the saying goes, “On30 is funner.” It is even more so when you have the camaraderie of great friends and great trains.