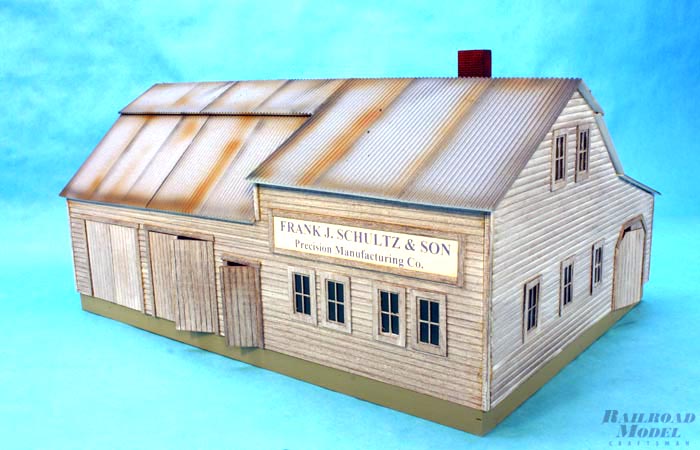 Frank J. Schultz & Son could easily find a home on your layout, ready to ship and receive goods by rail. This easy to build structure can easily be completed in several evenings and will take pride in place on any standard or narrow gauge layout. Creative Laser Design once again has designed a straight forward, reasonably priced kit that is a joy to build.

by George Riley/photos by the author

Creative Laser Design’s latest O scale kit is based on an actual light manufacturing facility located in northern Vermont. The Frank J. Schulz & Sons Precision Manufacturing Company has manufactured carved wood deep sea fishing lures for decades in Sutton, Vt., at their gambrel-roofed plant. Like most small enterprises this unique wood working facility is short on embellishment and long on character making it a perfect subject for a small rail served industry. The model will fill the bill for any type of small manufacturing business as well as filling the bill as a small dairy or farm structure.

The structure initially appears large and complex due in part to its fairly large foot print and multi-angles gambrel roof, however, once construction begins it prove to be very easy to assemble and requires a minimum of experience to produce a satisfactory model. This is further aided by the comprehensive step by step illustrated instructions included in the kit. The laser cut basswood, plywood and clear acetate parts all fit perfectly. In addition a ½ inch thick birch plywood ‘foundation’ is supplied that goes a long way to help construct a durable and square structure. Each of the walls is a single laser cut panel of basswood that is joined to its mating wall with a specially milled basswood corner piece. The windows consist of only three pieces to replicate the four light casement windows that are often used in industrial and farm building construction; an outer frame, a four light window frame and clear acetate glazing.

Each of the pieces were either stained or sealed, primed and painted prior to beginning assembly. The walls, doors, trim and windows were first stained with MinWax Early American Stain n’ Seal before receiving a coat of white gel pickling stain to replicate worn paint. The roof panels received a coat of sanding sealer and gray spray primer before being sprayed with several coats of Rustoleum Hammered Steel spray paint. Additional weathering was later added with an airbrush once assembly was complete.

The walls were completely assembled and interior bracing was added before erecting them to the base. While the adequate bracing is furnished in the kit, additional 3/16 square basswood bracing was added to further reinforce the model. This is done as a matter of course since many of the review samples are used as part of traveling show displays.

With the walls in place adding the panels to build the complex looking roof was very easy. Each course of panels was glued together and reinforced with hidden bracing before being attached to the model. Only a light sanding on the two top panels for the roof peak angle as specified in the instructions and a slight trim of the front panels was needed to complete the roof.

The addition of the company sign to the building was all that was needed to complete the model. This easy to build structure can easily be completed in several evenings and will take pride in place on any standard or narrow gauge layout. Creative Laser Design once again has designed a straight forward, reasonably priced kit that is a joy to build.