I have long thought there was a place in the market for cars in between the inexpensive and generic prototype cars and the perfectly detailed but fussy operating high-end cars. This AMS car fits perfectly between those extremes.

Reviewed by Chris Lane/Photos by the Author

American Model Supply (AMS) has made the rounds at the shows for the last few years showing narrow gauge sample cars for the On30/On3 modeler. These cars are now hitting the market and that is good news for modelers looking to expand their rosters with sturdy, good-preforming cars of familiar prototypes. The first of these is a model of the Denver & Rio Grande Western 6000 series flat cars. AMS has produced a solid model with accurate dimensions, and good operating characteristics. Flat cars may not be as sexy as other examples of rolling stock, but railroads needed them in multiples and with most modelers requiring the same, these are a good choice for expanding your roster

The prototype for these cars was built in 1887 by the Denver & Rio Grande to replace older, smaller and worn-out cars. These were the first 30-foot, 20-ton capacity flat cars the railroad owned. There were one hundred cars built, each weighing 13,500lbs and they were numbered 6000-6099. They carried those numbers throughout their time on the railroad and they are the oldest cars to survive until the end of operations.

Prototype flat cars lead a rough and tumble life, and the cars started to leave the roster almost immediately. By 1902, there were 81 cars and by 1916 that number was down to 66. In 1924, most of the railroads rolling stock was upgraded and the 48 remaining cars received this treatment, ending up weighing 16,000lbs.

Even with the modernization, the cars were getting pretty old and tired, so the D&RGW scrapped fourteen of the cars in 1926 and used the hardware to build the new 6300 series cars. By 1939, the series rostered only 17 cars and when the US Navy bought fourteen cars in early 1942, the cars were effectively off the books.

However, many cars continued to survive in work service. The D&RGW had the practice of taking a car off the revenue roster and placing it in work service by adding a “0” prefix to the existing car number. The Rio Grande made a number of water cars out of these flats by marrying them to the tender cisterns from scrapped C-16 class locomotives in the mid-1920’s. They also provided the frames for oil cars, work flats, flat-outfit, rail & tie, materials cars, wrecking flats and the boom car for Derrick OP. Four of the MOW cars survived to be transferred to the Cumbres & Toltec in 1970, and another is preserved at the Colorado Railroad Museum. More details can be found in Sloan’s book, A Century + Ten of D&RGW Freight Cars.

Because some examples still exist, we have drawings and photos to compare the model to and AMS did a fine job in scaling the model. It checks out in all major dimensions and the vast majority of the minor ones. They fudged the configuration of the underframe timbers a bit to give the trucks a bit more swing. I think this was a good call. Other cars made for the On3/On30 market have had scale underframes and require higher radius curves. AMS claims 18” minimum radius in On30, and this car meets that claim. Certainly, as with any scale 30′ car, the larger the radius, the better it will like it.

The car rides on smooth-rolling, rigid (non-equallized) trucks modeled after the standard 3′-7” archbars that supported many of the Rio Grande’s 30-foot cars. The trucks have nice details, but have a few dimensioning issues. The wheelbase actually scales out at 3′-8 1/2” which moves the brake shoes out more than they should be and the spring section of the truck is wider than prototype. Unless you use the digital calipers on them, and know the prototype well enough to make scale drawings of them like I did for Slim Gauge Cars, you’ll never notice the minor dimensional errors with the trucks under the car. The wheels are metal and scale out to the proper 26” diameter. Better, they also are the correct On30/On3 width. Occasionally, HO wheelsets have been used on On30/On3 models and the .020” makes a huge difference visually. I’m glad AMS got this right.

The car comes equipped with a Kadee® No. 803 clone. The first version of this coupler (which came on the AMS boxcar) did not open or center very well, primarily due to the springs being too tight. AMS went back to the drawing board and this coupler operates very well and is fully compatible with Kadee’s, Bachmann’s or San Juan’s Evolution™ coupler. The best feature of all AMS cars is the variable height couplers. On30 cars come equipped with a spacer that drops the coupler down to On30 (HO) height. If you prefer the On3 height favored by many On30 modelers, you simply unscrew the coupler box, discard the spacer and reinstall the box. The AMS box matches the outside dimensions of the Kadee 803 box, so if you’d prefer the Kadee, it is quite easy to make the change without modification of the car. My personal favorite, the San Juan Evolution, can be added to the AMS box with a minor modification.

Moving to the underframe, AMS modeled a pretty complete set of brake rigging including a nice Westinghouse K brake cylinder and air reservoir casting. To be nitpicky, the levers are a little oversize and the brake cylinder should be mounted closer to the center sill, but unless you are going to use the car upside down in a wreck scene, this is not going to bother you. In normal viewing position, the details look fine and add a quite a bit to the cluttered appearance under the car.

The underframe also exhibits two distinguishing features often seen on D&RGW cars. One is the frame splices on the center sills. The thinking on this was if the car encountered more stress than it could handle, the car would fail at this point, so the car toads would only have to repair one end of the car instead of the whole car being destroyed. The other detail is the small block of wood under the queenposts nearest to the brake cylinder. These blocks lowered (relative to the rails) that one turnbuckle and set of truss rods so they could clear the cylinder.

Flipping the car over, the deck displays nice wood graining. This is one area where you can’t really “over-weather” as these decks took a real beating on the prototype. The side sills have the proper number of stake pockets and they are located in the proper location. Rounding out the details are grab irons, stirrup steps, coupler lift bars, truss rod nuts, air hoses and the brakewheel/staff/rachet and pawl assembly. I should mention the brakewheel. The standard D&RGW brakewheel was a five spoke, 16” diameter wheel that had holes all around. The spokes “swirled” for lack of a better word and forked into a triangular shape where they meet the inner edge of the brakewheel. (See the drawing). On the first AMS car, they had a bit of a scaling misadventure and the brakewheel had a diameter of over 21”. It was a nicely and accurately detailed, it was just 30% oversize. On this car, they went back and tried again. This time, the details are simplified a bit and the brakewheel scales out to be 14½”. Sigh…

On the positive side, it is a brass casting soldered to a brass shaft, so the little bit of scale fidelity you give up is traded for a much more robust detail. Likewise, the stirrups are flat brass stock twisted just like the prototype. While a bit thicker than an engineering plastic casting would be, they are much more durable. As I have a frightening number of cars whose beautifully rendered brakewheels and stirrups have broken off and are missing, this seems like a reasonable compromise. This model wasn’t designed to win a contest, it was designed to run well and look good on your layout for years to come, and it does that very well.

As far as running, this model is good to go right out of the box. It weighs 1.7ozs making it average/low average for a narrow gauge flat car. Most of us will add some sort of load, which will increase the weight. The AMS tank car, which uses this flatcar as its underframe, weighs 4.4ozs. As mentioned at the beginning of the review, the On30 car had no trouble with 18” radius curves, so the On3 version should be fine on the 24”. It does point out that the slight difference in track gauge makes a pretty big difference in minimum radius. The trucks both roll and swivel smoothly and they didn’t exhibit any tendency to derail on less-than-perfect track. In all, this is as good an operating On30 rolling stock model out of the box as I have reviewed. 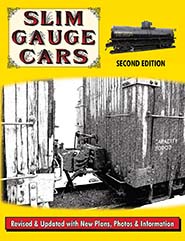 My sample was decorated as D&RGW No. 6049. It is painted a nice boxcar red and it matches one of the three oxide reds I found at the Colorado Railroad Museum. (See Slim Gauge Cars – Second Edition for more info.) The white lettering lists the correct data and generally matches the placement of the lettering seen in the few photos that exist of these cars in regular service. The lettering isn’t 100% opaque, which duplicates the appearance seen in photos very well. Overall, both the paint and lettering are well done.

In addition to the D&RGW scheme, the car is offered for Rio Grande Southern, Colorado & Southern, Southern Pacific, Pacific Coast, Nevada, Oregon, California, Nevada County Narrow Gauge and East Broad Top. Obviously, the car isn’t 100% correct for the other paint schemes, but the good news is narrow gauge flat cars were pretty generic and it is a good representative of cars those railroads owned.

For example, the one plan I have for the Southern Pacific flat No. 259 (Slim Gauge Cars pg. 58) shows a slight difference in spacing for the stake pockets and needle beams, but the car matches well in other dimensions. The RGS cars were gone by the late 1930’s but this series was built to D&RGW specs and based on capacity and length it would seem likely it was the 6000 series plans. If you substituted San Juan Car Company’s 4′ C&S archbar (Kit 205-On30 or 205 for On3), then you have a very creditable model of the truss rod C&S flats, and I suspect you’ll find similar results with the other road names. The better news is AMS took the time to letter them in the proper road numbers, so even if the details don’t match exactly, the car will fit well with the rest of your fleet.

I have long thought there was a place in the market for cars in between the inexpensive and generic prototype cars and the perfectly detailed but fussy operating high-end cars. This AMS car fits perfectly between those extremes. “Value” is a pretty subjective term, but in my view, this car is a great value in terms of the detail and operating characteristics.